This blog post is the third in a series explaining how U.S. city, state and business leaders are working together to fulfill America’s Pledge on climate change through win-win solutions that are good for the climate, for the economy and for people’s lives and livelihoods. Learn more about America’s Pledge.

This past month the United States sold its one-millionth electric car (more than 4 million have been sold globally). The event marks a significant milestone and demonstrates that mobility in the U.S. is on the threshold of a major technological transition to an electric mobility future. This monumental transportation transition is coupled with unprecedented levels of subnational engagement on climate change. Leadership on climate change and clean transportation is increasingly coming from states and cities who have come forward to uphold the Paris Climate Accord in the face of federal resistance. 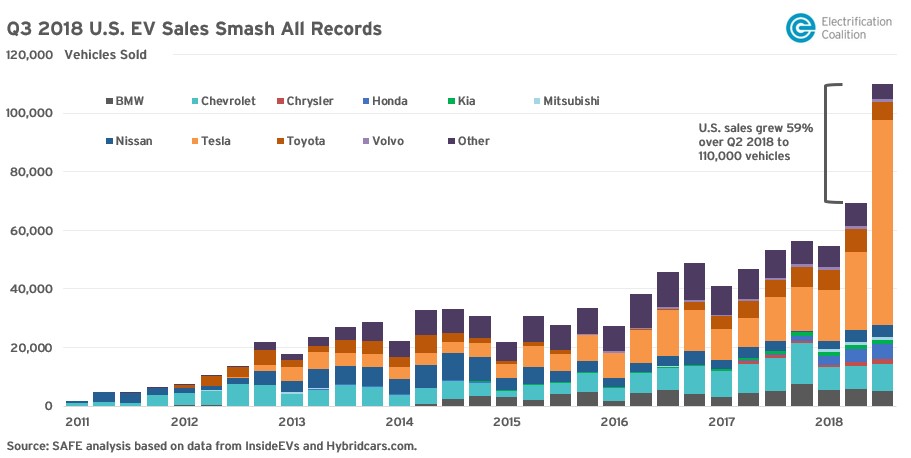 Cities are recognizing that each electric car that plugs in offers an opportunity to improve our air quality while also reducing GHG emissions by as much as half that of its internal combustion engine counterpart. Such reductions are exactly the reason Climate Mayors, a network of more than 400 U.S. mayors committed to taking meaningful action on climate change, have focused on how they can use their collective commitment to show strong demand for electric vehicles by transitioning city vehicle fleets to electric. Climate Mayors have partnered with a national non-profit working to accelerate EV adoption, the Electrification Coalition (EC), to launch the Climate Mayors EV Purchasing Collaborative, a first-of-its-kind one-stop location that provides cities (and other public agencies) with a critical platform to transition their fleets to electric. 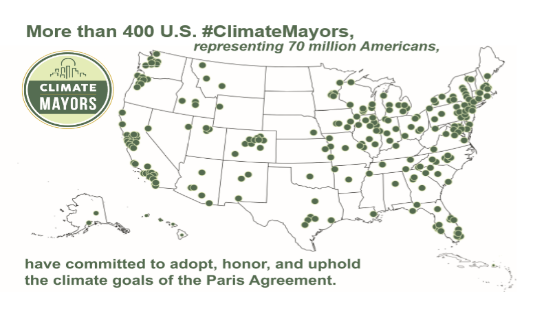 The site connects cities with “total cost of operation” assessment tools, a large variety of purchasing options for EVs and charging stations, competitive and transparent pricing, and leasing options that can help capture the federal tax credit (a current challenge for public agencies), all through the of help of our cooperative procurement partner, Sourcewell.

The Climate Mayors EV Purchasing Collaborative (the Collaborative) launched with 19 founding cities and three counties committed to purchase almost 400 vehicles in the coming year and the Collaborative will be working with cities across the country to accelerate city fleet electrification commitments in 2019 and beyond. 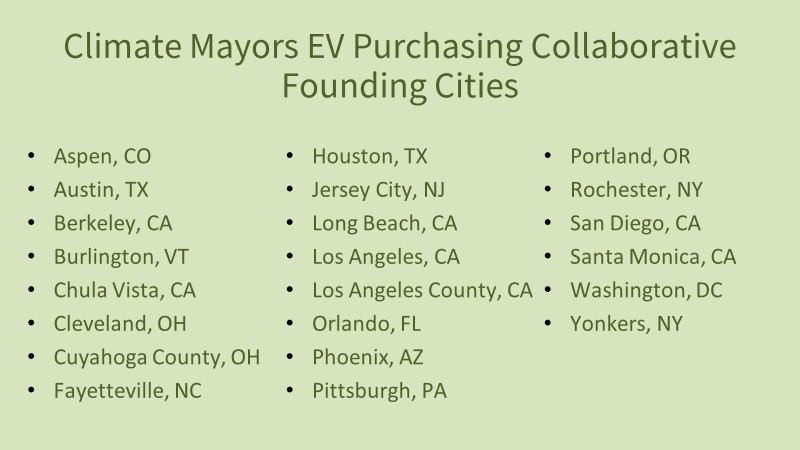 But the number of committed cities continues to grow! Recently, Bloomberg Philanthropies’ competition, the American Cities Climate Challenge (ACCC), selected a group of 20 winning cities that each submitted transformative plans to tackle climate change and promote a sustainable future for residents. Many of the winners are focused on advancing electric vehicle (EV) adoption. Just this week, we were excited that Charlotte, NC, was announced as the most recent ACCC winning city. Charlotte is already working to utilize the Collaborative team to help meet the city’s ambitious goals to transition a portion of its municipal fleet to electric.

As a direct result of the leadership from Bloomberg Philanthropies, Climate Mayors, and new efforts from cities like Charlotte, transformative change is already underway. Just this past week Chula Vista, CA, became the first city to use the site to purchase 34 new EVs. We commend the action of the founding cities who are already starting the transition. With more city purchases coming soon, this is just the start. 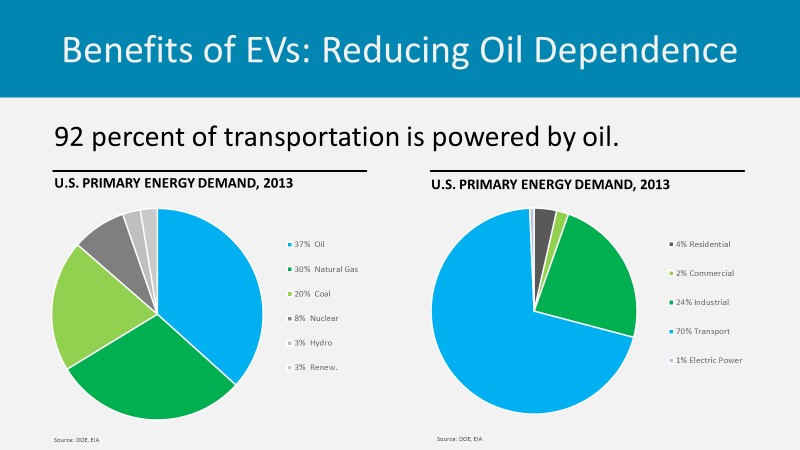 By transitioning fleets to electric, cities are also in a unique position to affect the adoption of EVs by consumers. Increasing the number of fleet vehicles on roads increases exposure and provides proof of concept to residents. With more EVs visible on city streets, the technology becomes the norm rather than the exception, creating meaningful market transformation impacts as a result.

Nowhere is this need felt more substantially than at the city level where quality-of-life measures are most visible through the need to meet benchmarks for clean air, economic stability, education, and other essential services. Due to municipal leaders’ proximity to citizens and their direct management of vehicle fleets, as well as their need to hit emissions, budgeting and climate goals, decision-makers at the municipal level are uniquely positioned to fill the leadership role needed in the U.S. transportation transformation.

From one coast to the other, U.S. cities are taking the much-needed leadership role in this important mobility transformation. And now with support from America’s Pledge, the American Cities Climate Challenge, and collaborations like the Climate Mayors EV Purchasing Collaborative, the opportunity for action to fulfill America’s Pledge has never been easier or more important.

Rob Phocas is the sustainability director for the City of Charlotte, a City with nearly 800,000 residents that was recently named a winner of the American Cities Climate Challenge.

Ben Prochazka is the VP at the Electrification Coalition.  The EC is a nonpartisan, not-for profit group promoting policies and actions that facilitate the deployment of electric vehicles on a mass scale in order to combat economic, environmental, and national security dangers caused by our dependence on oil.

James Ritchotte is Director of Climate Mayors, a network of more than 400 U.S. mayors who represent over 70 million Americans and are committed to taking meaningful action on climate change.